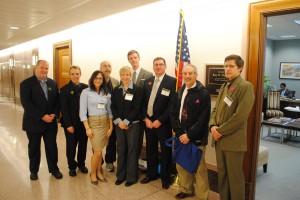 I’m sure some wise man once said, “All good things must come to an end.” That’s where I stand now. However, I can say that today was worth the trip alone for many reasons. Let’s recap!

My day started early and my first meeting was with Congressman Mike McIntyre’s aide Stratton Kirton. To be clear, in most cases with meetings at the office of Senators and Congressman you aren’t actually going to meet with the rep. In most cases you are meeting with a 20 something Legislative Assistant who works on Transportation or Natural Resources. That was the case here. The big issues that all the cyclists were working on in DC this year was just asking for funding to continue to Safe Routes to Schools, Transportation Enhancement, and the Recreational Trails Program. With the new congress with over 90 new members (that largely want to see funding cuts) our goal was not to ask for anything new. Instead we want to maintain what we have. Once I was done with that and had left him all of the materials on the important projects I also invited everyone with the McIntyre office to take a kid mountain biking day in October. Its something we can all work on in the Cape Fear Region.

Its at this point I think we are about done. My new friend and help for this particular meeting Randy Bass of Winston-Salem then asks if its ok if we have a picture with Mr. Kirton. This is where the plan changed! Mr. Kirton brought up that the Congressman was actually here and might have time to chat and take a picture with us. Well one thing left to another and this picture happened. 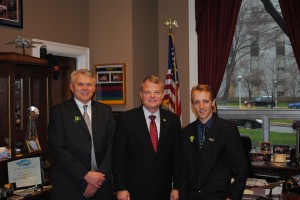 From left to right: Randy Bass, Congressman McIntyre, and myself

It was amazing to have the chance to repeat a few things to the Congressman that I otherwise would have left with his aide. Lets hope that this can develop into a relationship that all cyclists in our region can benefit from! The key? Follow up follow up follow up!

Next the NC delegation met up on the opposite side of Capital Hill to stop in and say hello to Senator Kay Hagen’s people. This time I kept mostly quiet and let the more experienced members of the party pitch our message. Sadly on this occasion we did not get to see the Senator (unlike last year when the Senator spent the entire time talking to us). However, Senator Hagen is a huge supporter of cycling and greenway systems and her aide was very interested in our issues and asked for additional information on specific problems that a few of our delegates were facing. 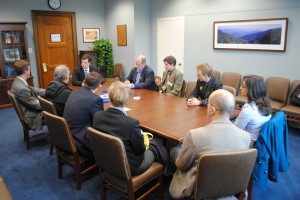 The NC Delegation in deep conversation in Kay Hagen's office

Lastly the end of the day came and all the Bike Summit attendee’s filed into the Dirksen Senate building to enjoy some food and drinks and get a chance to chat about what had happened that day. Its at this point I found out about an interesting rumor floating through the NC Delegation. I won’t say who I heard it from, but apparently there is a chance that the cyclists in NC might have a chance to converge on Raleigh for a NC version of the summit. That’s right folks, a NC Bicycle Summit is a distinct possibility.

So, what did I take away from the summit this year? Well first, David Wiens is a very down to earth person who, much like me, is trying to get more involved and learn about what he can do to pursue better cycling infrastructure. Also, mountain bikers really are the ones everyone wants to talk to. Lastly, the political process isn’t always exciting and you don’t always get to chat with your reps. However, when you do, it makes the effort you went through all worth it.

Thanks for following along with my travels everyone, when there is more to speak about concerning the possibility of a NC Summit you will hear it from me. Also I have some wonderful plans for a few pet projects I want to start up. Those too, will be coming soon.