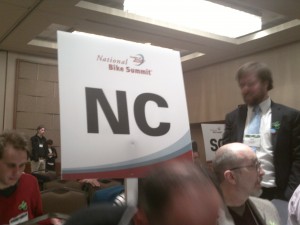 Its nothing like hearing a speech start with this question: “How many people are stuck in traffic on their way to ride a stationary bike in a health club?” That is how Congressman Earl Blumenauer (D-OR) began his speech to start the 2nd day of the National Bike Summit here in DC. Its so very funny that people want to drive to go indoors to exercise when we have the ability to right in their own back yard. But I guess if more people wanted to do that, I wouldn’t be in DC right now!

Janette Sadik-Khan, the Commissioner of the NYC Department of Transportation, followed the congressman. She is one of the people responsible for the large-scale improvements in the bicycle infrastructure throughout the city. One of the points she made was that while it would be nice for the Federal government to aid us with inclusion of bike lanes etc…but we can’t wait for Washington. As advocates we can work to get things done locally WITHOUT federal funding. She also announced the creation of the Urban Bikeway Design Guide, something that they hope will become nationally recognized as the standard for bikeway design.

Our last morning speaker was the 2nd member of the Obama cabinet that I have seen in the last two days. The Secretary of the Interior Ken Salazar was the final morning speaker…and he managed to give us all a laugh indirectly. Since the Secretary was late arriving Andy Clarke of the League and Mike Van Abel of IMBA had to do a little verbal song and dance to keep us all interested until he arrived. They went back and forth about various “important” topics…none of which I remember simply because we were laughing at their attempt to stall. Luckily though, Mr. Salazar finally arrived to save us all and he gave a delightful little speech as well. 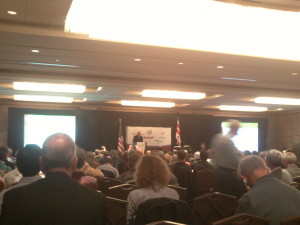 For the next 5+ hours I spent time in various breakout sessions learning as much as I could about various topics. I spent some time in a session that was talking about getting more youth active and engaged in the cycling community. I also took the time to listen to experts help describe to delegates what things they can do to make their pitch sound better and work better. Fun fact, did you know that DC is mostly run by 20 somethings and not the politicians? I bet they survive on red bull instead of coffee these days!

After our breakout sessions we finally got to meet up with the rest of our state delegations. It was great to see some of the same faces from last year like Steven Hardy-Braz from EC Velo and the folks from Liberty Bikes in Asheville. Also, we had new faces from across the state, bringing our grand total to around 20 people. Not bad at all. 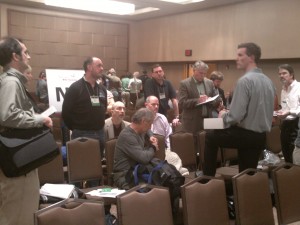 A View of the NC Delegation at the National Bike Summit!

At the end of the day after a meet and great with other IMBA delegates I got to have a bite with the rest of the mountain bike nuts at a wonderfully crowded pub down the street. During this time I got to spend some time talking to various people, including David Weins. “David who?”, you might say. Oh he is nobody, just won the Leadville 100 a few times and beat that Lance Armstrong guy at it once.

Tom Sauret, the Southeastern regional director of SORBA made a funny statement about that chat with Dave. It went something like, “First Gary Fisher last year and now Dave Weins, you’re collecting them huh?”

Maybe I am Tom, maybe I am…

Long day tomorrow friends, wish me luck with Mike McIntyre and his staff.