Racers smile for the camera before the Time Trial begins!

2011 Summer Time Trial Series-Week 2
Wow, another great event tonight at Brunswick Nature Park.  We had a total of 13 riders, with members from Cape Fear SORBA and the Waccamaw Trailblazers in attendance. I’m also excited to let everyone know that we also had two of our ladies come out and take part as well.  So far we have had a good turnout at each of these events, my goal now is to have at least 15 riders next week, so please come out and take part or cheer on the ones that are.
So who won the Time Trial this week? Well lets take a look shall we!
Times:
Steve Mangiacapre-  23:28
Tom Condon – 23:54
Greg Brinson – 24:14
Jere Dearing – 24:32
Bryan Weinkle – 24:38
Armando Sanchez – 25:11
Marshall Brown – 25:15
Spencer Thomasson – 26:33
Jesse Savage – 29:29
Jim Halley – 30:41
Meredith Sullivan – 32:43
John Sledge – 35:30
Kirsten Jones – 36:55
Steve had the fastest time again tonight, with Tom less than 30 seconds behind him, and then Greg was only 20 seconds behind Tom… That’s the top three riders all within 30 seconds of each other… Jesse Savage turned in a time of less than 30 minutes, and that was including blowing out a tire, getting it back on the rim and pumping it back up.
Tonight’s lottery winner was also Steve!  Steve donated his winnings, short his entry fee, back to the club. Thanks buddy!
As you can tell, we are having a lot of fun on Thursday evenings out at Brunswick Nature Park, we hope to see you out there at the next event next week.
Here are a few more pictures to whet your appetite! 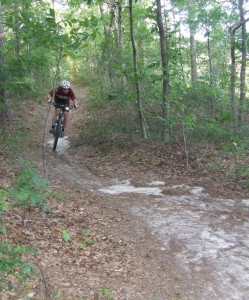 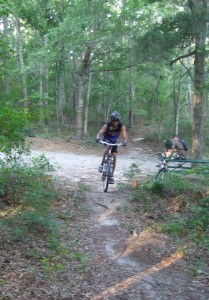 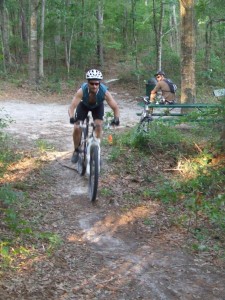 You spell his name J-e-r-e! 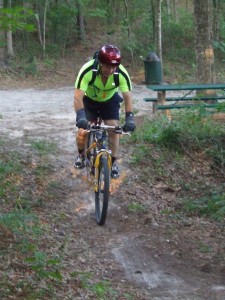 John Sledge at his best! 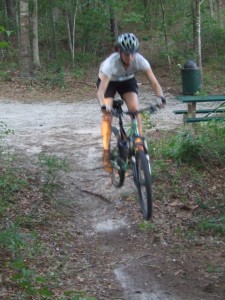 The ladies were here this week! Meredith is so fast she is almost a blur! 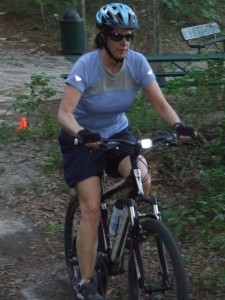 And Kirsten is just having a blast!

Thanks everyone for coming out this week! We hope to see you next week at the Brunswick Nature Park for the June Time Trial Series-Week 3!