Here is a little ride report written up by our good friend Armando! His senior project bike ride, the “Halloween Ride” was this past Sunday and we wanted to share the fun with all those who missed out! So enjoy the report and we hope to see you all at the Brunswick Brawl this weekend!

Welcome to the Halloween Ride!

Hello my fellow mountain bikers!!! Here is an update on what went down during the Halloween ride held this past Sunday. The ride had a small twist to it: you could come dressed in costume! As riders began arriving so did the costumes and the setting began gaining its Halloween touch. Once we had all the riders at the park we knew it was going to be difficult to choose the winner of the costume contest so we left it until after the ride. After various pictures were taken and candy was given to the riders, everyone was ready to set off into the evening ride. The ride was quite difficult for some riders who had costumes that interfered with their riding abilities(SORBA EDIT: Ahem who is that clown in the wolf mask anyway?), but everyone managed to finish the ride without injuries.

At the end, two of the riders, Armando and Greg, had a sprint for the finish but Greg’s costume reduced his aerodynamic profile, thus allowing Armando (with the cape) to win. The ride was quite different and fun and we found that the best way to chose the winner of the gift certificates was to vote on it. The first winner was Jere Dearing who dressed up as a pirate ARGHHH. The second winner was Christopher who dressed up as a zombie ship’s captain! Christopher was also brave enough to ride from downtown to the Blue Clay trail and back while dressed up as a zombie ship’s captain. Now then here are a few pictures for you all to enjoy! 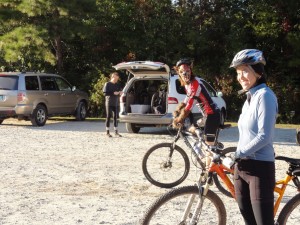 Who is that (Wolf) masked man? 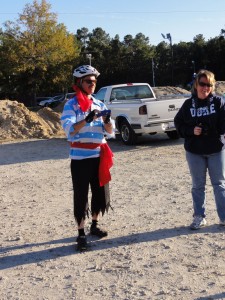 Jere the Pirate! He'll feed you to the....trail gnome! 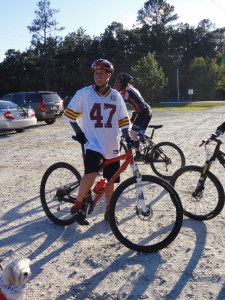 President Brinson is a Redskin player. Sadly, he didn't have the helmet to match. 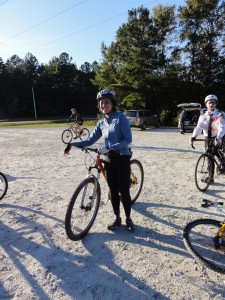 Look out! Tse-Lynn will bite your neck and suck your blooood 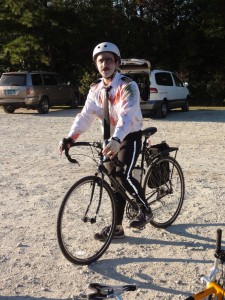 The zombie captin Chris wins for hardest of the hardcore. He rode to the trail from downtown like this! 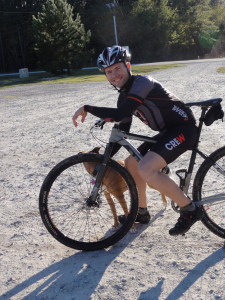 As for Brandon...what was he again? Oh i remember he was the injured mtb racing dog whisperer...right?